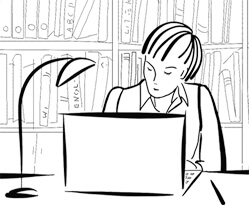 Are you looking to translate a contract,

technical document or letter from one language to another?

If so, you need translator, i.e. a professional who works with the written word. We occasionally speak of a 'transcription from one language to another' but this is not really the right word to describe what a translator does.

We carry out translations for all types of text, between many languages.

The text for translation can be sent via email or a secure server. We also send translations electronically. 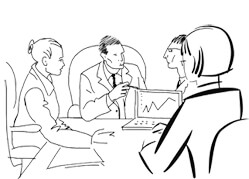 Are you seeking a professional to translate your in-person discussions

into two or more languages?

If so, you need an interpreter rather than a 'translator' for a consecutive or simultaneous interpretation depending on the number of languages and, more generally, on the setup of your event.

We can advise you on the most appropriate type of interpreting and find an interpreter or team to carry out the interpretation for your event.

Take a look at our Interpreting Services page or get in touch directly by e-mail or phone.

Are you looking for a translator to translate and swear your official documents?

We also offer this service.

The documents must be sent by email and we will send the duly certified translations back to you by post or courier, if you are based in Paris.

English, French, Spanish, Chinese and Russian are some of the most requested languages.

We have established, long-term working relationships with professional freelance translators who we trust completely. However, we always proofread the translations in-house before delivering to our clients.

We always respect our delivery commitments and deliver impeccable translations.

An extended international network of professional translators and interpreters

An experienced and responsive interpretation and interpreting equipment partner

What are the qualities of a good translator?

First and foremost, a good translator must be curious and take an interest in any subject they come to work with.

They must have excellent general cultural knowledge.

They must also be meticulous because when it comes to translating a contract or official document, there's no margin for error.

Finally, they must be patient because the translation of technical documentation for an industrial machine is not always the most exciting of tasks!

The path to becoming a translator

It all begins with a passion for foreign languages, followed by a lengthy learning process and extensive translation training.

The journey to translation is often unusual. It is not uncommon to arrive at a translation school after a professional experience or an international career. The translation degree is rarely the first for a translator and previous study may boost their expertise in a more specific field such as legal, political or scientific translation.

What our translators say

"I first realised I wanted to go into translation on my gap year in Argentina. I loved making the connections between two languages and translation seemed the perfect career choice.

I went on to gain a BA in French and Hispanic Studies and an MA in Translation and Interpreting which only confirmed my decision.

My first translation experiences took me to Paris where I did an internship and some freelance work before working in-house for two and a half years.

I then started my freelance business to specialise more in my chosen fields and gain the freedom to travel. That was more than three years ago now and I’ve never regretted my decision!"

English–French Translator
Our translators in this language combination are native speakers of French, based in the European Union.

French–English Translator
Our French–English translators are based in the UK or the USA.
The translated text can adopt an American or British ‘flavour’ to suit your needs.

English–Spanish Translator
Our Spanish-speaking translators always work into their mother tongue – Spanish – and will adapt your texts to the target country, i.e. Spain or a Latin American destination.

Spanish–English Translator
In this language pair, the translations are carried out by professional English native speakers with an excellent command of Spanish and its nuances.

English–Russian Translator
For translations into Russian, we call on our team of professional translators based in France and Russia.

Russian–English Translator
We have regular requests for translations from Russian into French and English.
Native speakers of English or French, our seasoned translators are familiar with the subtleties of Russian to meet your needs.

English–Chinese Translator
For this language combination, we work with Translation graduates from ESIT (postgraduate translation and interpreting school in Paris) so we're confident of delivering a quality translation.

We also work with Dutch–French and French–Dutch translators, German–French and English–German translators and translation professionals in other language combinations.

All of our translators are graduates and all translate into their mother tongue only.